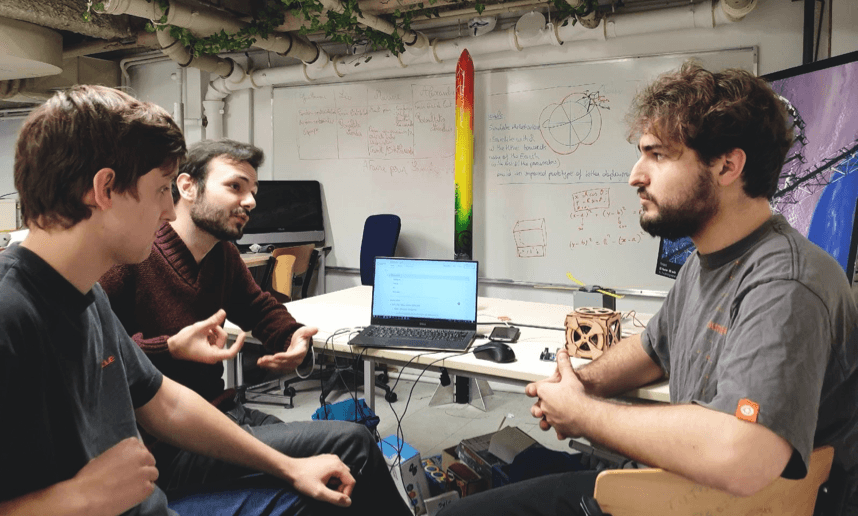 Space pollution is indeed a growing problem, but may not be so obvious or visible to people on earth. Alexandre de Villardi de Montlaur and his team are among scientists and engineers trying to solve this problem. Alexandre, coordinator of the most significant project, the ECE3SAT project at ECE Paris, shares with us on how Quire has supported his team in designing a deboriting satellite that seeks to resolve this growing issue.

Not so obvious, but persistent problem.

As more and more rockets are launched into the air, the accumulation of debris has increased over the years. And, we may not realize the catastrophic damage a tiny debris, smaller than a dime, could cause towards shuttles and the crew’s safety. It is a risk that is as dangerous as the failure of the shuttle’s main engine. And, “Currently, about 20,000 debris larger than a tennis ball and millions of debris, less than 1 cm, orbiting at 28,000 km/h [are present in space]” comments Alexandre. And, it definitely poses a threat not only to the “International Space Station (ISS) and telecommunications in orbit,” but also to the safety of our Astronauts.

Alexandre, senior, specializing in Aeronautical Embedded System at ECE Paris Graduate School of Engineering, aims at reducing the amount of debris floating in space and lessening the dangers it poses. And, he precisely depicts how Quire has aided the team considerably while implementing this deorbiting satellite.

Alexandre and his team of 30 have been delegated to develop 5 different modules that were significant to the design of the CubeSat. One module includes the ADCS, which controls the rotation and orientation of the satellite. Another is the EPS, the energy power supply, which uses sunlight as a source of energy. Then, there’s the OBC, an on-board computer that operates the coordination and communication within the satellite. And the TCS, which transmits data back and forth from Earth. As well as an EDT, an ElectroDynamic Tether performed by Alexandre himself, to help reduce the deorbiting time from years to months.

This unique deorbiting system and overall project is very complex, and encompasses many challenges to perform and implement. And, because this huge project consists of much planning, structuring and sharing relevant information, etc. it needs an efficient and intuitive tool. As Alexandre and his team browsed through the abundant resources available, they could not settle on any one of them because “all the sites [they] visited unnecessarily complicated the use of their sites for no reason” stated Alexandre and “it would take at least several hours to become completely familiar with the tools….”

“No one has much time to lose, time can be used on the benefits of the project…”
-- Alexandre de Villardi de Montlaur

Intuitive simplicity and the ergonomics of a nested list.

Without the proper tool to keep tasks straight, there were constant obstacles. However, after coming acquainted with Quire, they overcame barriers and proceeded with implementing their goal. Because of Quire’s user-friendly interface and clean design, it truly fitted their planning needs and overall project management goals. What truly impressed Alexandre and the team is “Quire’s ergonomics and intuitive simplicity,” and the ability to attach and share important documents and files from Drives. As a result, overall communication has been enhanced. Limitations definitely do exist when relaying information amongst large groups and impede action, but with Quire, everything stays organized and everyone has the necessary information and resources available right at their disposal.

For challenging projects, you can break down ideas into chunks, and further into small, bite-sized pieces. What you then get is a well-structured, well-planned hierarchical actionable list of tasks and subtasks. When each item has been divided into smaller and smaller steps, you have a nicely laid-out plan ready for action. In our opinion, “nested to do list” is good for planning a project. It organizes your projects and lets you see the big picture. With a heterogeneous mixture of items to do, Alexandre and his team can organize a task list and add as many subtasks as needed with Quire’s unlimited level of hierarchical task. And, assign those tasks to the respective members, which makes things rather less complicated. In turn, providing extra time and focus on the project itself.

Working hand in hand with Quire!

The benefits of working on a clean list, without the extraneous clutter, help keeps their attention and aim on the goal. When utilizing Quire, Alexandre and his team gains a clear and quick overview of statuses and members’ progresses. And, everyone stays on the same page. To their advantage, they operate on a more smooth and efficient plane.

After gaining insight from Alexandre and his team, we were pleased to hear how Quire has helped young generations with overcoming challenging feats in future technological advances. It is our goal to help dream chasers tackle major challenges and actualize their dreams. We seek to continue in making a difference for a better world. And, we aspire to hear more great stories about Quire’s role in pursuing those goals!

Vicky Pham
Trying not to get lost in the city lights.