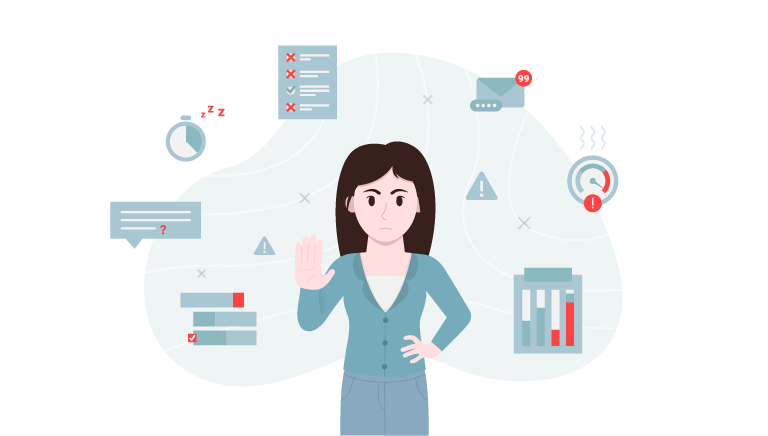 When you’re in charge it’s easy to confuse being busy with being productive. And, it’s easy to fall into that trap of thinking you have to do everything: make every important decision, do 12 things at once. Never stop.

The short answer is no, busy does not always equal productive.

However, there is that toxic workplace mindset which would have us believe differently. That mindset which says you must always be doing something. Because if you’re busy, work is being done.

The top 8 productivity myths, and what to do instead

We can look busy without being productive. We can think we’re doing all this great work, when really, we’re creating more work for others—or ourselves—later.

It’s easy to fall into the trap of busy equals productivity. Here are 8 productivity myths you easily identify, and what to do instead:

Typically, the only thing multitasking boosts is how many errors we make. When trying to do many things at once, we often barely scratch the surface of each task. Instead of giving our full attention, and so completing a task faster, we believe it’s better to do three things at once.

Is that screen loading? Quickly work on something else. Oh, and there’s that email to answer, that call to make, and so on, and so on.

Managing dozens of projects at the same time is a stressful process. One that, ironically, slows down the progress of each task in your workflow.

What to do instead of multi-tasking

The best, and most productive, thing to do is one task at a time. Sounds simple enough, doesn’t it?

Just concentrate and prioritize what’s most important, and work through that. In working this way, you will get through tasks not just quickly but also efficiently. And as you complete each task, you will have a greater sense of accomplishment as you tick them off your list.

Procrastinating is usually a sign that there’s something amiss. Maybe you’re lacking direction, or you're worried about failing, or there’s some lingering doubt as to your current task’s usefulness.

So, instead of finishing the task, you find an excuse to do something else. Procrastination can often be why we multitask. We think if we dip into a few different projects this will help us stay motivated. With the added bonus of getting at least a few things down.

But, as we’ve already mentioned, this backfires more often than not.

What to do when you notice you’re procrastinating

The first thing to do is identify why you’re procrastinating. If it’s a lack of direction, stop and take a quick look at an overview of your project. If your project is mapped out in task management software, this can be done quite easily. You can see the whole project, who’s working on what, and how the whole thing comes together.

The busy work, the menial tasks that are always going to be there no matter how many of them you do. These can be left until later. And ideally, should be. Studies have shown that the small, fiddly tasks that can chew up an entire morning, are as harmful to your productivity as scrolling through your social media feeds.

What to do in the morning before the busy work

For the sake of productivity, and meeting deadlines, it is far more valuable to do the hard work first thing. The benefit of this is you’ll be at your most creative, and awake. Putting you in a better position to finish those harder, more meaningful tasks.

When you do need a break from those tasks, that is a good time to do the smaller, lower-priority tasks.

Read more on live a stress-free life with GTD Method.

Pressure may force you to act faster, but that’s not always a good thing. Especially, if you act on impulse, or you don’t consult with the right people. And even if you don’t think you need to consult with someone, it’s never a bad idea to bounce ideas off of others.

Working in a constant state of crisis is not only unhealthy, it tends to make you less creative, and less likely to do meaningful work.

Having a project planned out as much as possible is often one way of avoiding pressure. With everything carefully mapped out, and each staff member’s task list organized to ensure a project is completed on time, there’s less pressure on the leader.

With task management software, this can be done efficiently, reliably, and predictably. Map out projects, and create tasks lists and sublists to ensure team members complete tasks in the right order—and to deadlines. The advantage of this is that there’s less need for day to day management of your team members’ tasks lists. Freeing up your time to do other meaningful work.

To-do lists can be productive, but only if you approach them properly. Studies have shown that those who set deadlines with strict parameters are most productive. And those who either don’t set deadlines, or give themselves too much time, fare poorly.

The ideal to-do list is one that ensures every task is working towards the completion of a project. As mentioned in myth 4, the simplest, most reliable way of doing this is with task management software.

It gives you a bird’s eye view of the project’s tasks and deadlines. It also allows you to drill down and see the larger and small tasks lists, and their deadlines.

Creating a to-do list with task management software ensures all tasks are completed in the right order, and to the deadline.

It’s important to re-examine what you’re doing each day. Is each task completed and the meeting attended helping you do your job better?

Everything you do should be helping you move towards becoming a better leader. Which means ascertaining what is the best use of your time, and what areas of your job you can improve upon.

What to do instead of trying to do everything

Instead of endlessly shooting hoops in the hope of perfecting a shot. Figure out which shot you want to perfect, and work towards that. Delegate what can be delegated to free up your time to improve upon those tasks and meetings.

Myth 7: it’s best to power through

It’s a commonly accepted myth that the best thing to do is power on through until a task is completed. That is, if you’re going to start you shouldn’t stop until it’s finished. But, of course, the problem with this is the average person’s brain isn’t designed for this. By powering through our concentration often flags, and we can make mistakes. This slows the process down because more time is needed for quality control.

What to do instead of powering through

Instead of powering through, it is better to work for 90-minute intervals and then have a short break. By doing this, you can potentially increase your productivity by 16%.

A short break can be anything from taking a short walk around your office, to stepping out of the office for some fresh air. Anything that gets you away from your computer can help you feel refreshed and jumpstart your brain.

Myth 8: there’s too much work to do

As was said at the top of the blog, busy doesn’t always mean productive. And not all tasks are equally important. When things get hectic, and there’s a lot to do, it can be easy to get overwhelmed.

If you’re trying to do too much, or you don’t have the proper organizational tools, becoming overwhelmed is quite easy.

What to do when it feels like there’s too much

Organization is the best way to manage your time, and the time of your team. Because when you’re organized, and you know where the goal posts are it’s much simpler to stay on track.

Organizing projects can be done simply, reliably and efficiently with task management software. This will help you keep the project on track and to the deadline

Having a project broken down into tasks, lets you know what needs to be completed and by when. Which can help to keep you, and your team, productive without feeling overwhelmed.

Become a great leader by being more productive

If you are looking to become a great leader, or simply want to improve the efficiencies of your company to complete more projects on time, you need task management software.

Have you tried out managing your work with Quire yet? Let us know in the comment section or share your stories with us in Twitter @quire_io